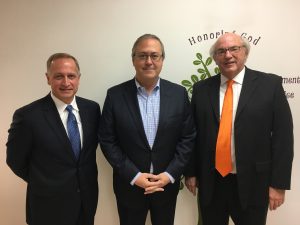 A little more than one week after the Nov. 8 general election, United States Congressman David Young visited Indianola’s Christian Opportunity Center on Friday for a guided tour of the facilities and a discussion of issues.

Congressman Young is a member of the U.S. House of Representatives from Iowa’s 3rd district.

COC Executive Director Rod Braun opened with a brief history of COC and updated Congressman Young on COC’s current services. Braun also presented COC’s federal legislative priorities, including H.R. 5902 (The Disability Community Act of 2016) and the potential for a federal block grant of Medicaid to the states.

The Disability Community Act of 2016 would provide a three-year targeted and temporary Medicaid funding increase to providers of disability services to comply with new Department of Labor rules in regards to overtime exempt employees effective Dec. 1, 2016. The temporary funding bill would provide states with the time to come up with additional funding to cover the costs of compliance with the new standards.

Braun asked Congressman Young to consider being a co-sponsor of H.R. 5902.

A federal block grant of Medicaid to the states would threaten the quality of COC’s supports and services. The Title XIX Block Grant would mean cost shifting to the states and local government. COC’s perspective is that strong federal government funding keeps services uniform from state to state, and that federal funding has been more dependable than state or local funding.

More than 20 COC staff, board members and parents of people supported attended the morning session, which ended with a time of question-and-answer and open forum.

The visit concluded with a guided tour from Regional Director Kim Koellner and Program Manager Bailey Eckerson, which enabled Congressman Young to interact with the people COC supports.

Founded in 1969, COC provides residential, spiritual and vocational support and services to more than 300 people with disabilities in Mahaska, Marion, Polk and Warren counties. For more information visit https://christianopportunity.org/ or connect with Christian Opportunity Center on Facebook. 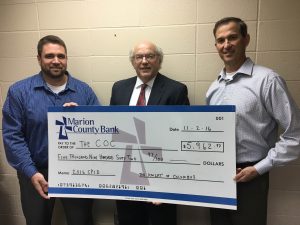