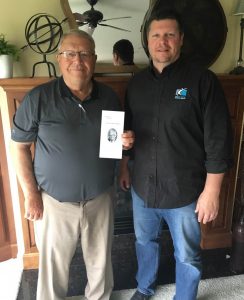 Christian Opportunity Center has been around for nearly 47 years and for 16 years and counting the Vander Molen family has been represented on the organization’s Board of Directors.

“I knew how much dad enjoyed being a part of COC’s Board, so that influenced my decision to be a part of it,” said Troy. “His involvement increased my interest in the organization.”

Troy and Larry do not know much about Jacob’s tenure, but many people can vouch for his servant heart and positive attitude.

Jake, as he was known, was a farmer, cattle buyer, and clerk. He founded Peoria Stockyards in 1946 and remained with the business for 25 years. Jake and his wife Nellie lived in Peoria for more than 40 years before moving to Pella in 1987. He passed away in 2002 at the age of 87. 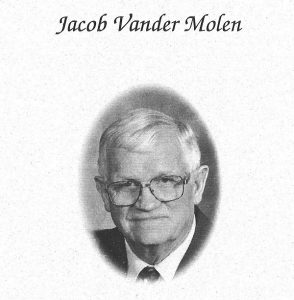 Troy and Larry joined COC’s Board after being invited to serve on one of COC’s committees. Both were excited for the opportunity to serve in this capacity.

“I have a real soft spot in my heart for the people supported,” said Larry. “They’re wonderful people. If everybody in America loved their jobs like the people at COC, it would be a different America. It’s great to see.”

“I believe in the sanctity of human life and everyone is made in God’s image and deserves to be treated with respect and honor,” Troy said. “I think that the population of people served at COC don’t always get that from everyone. It’s nice to find a way for them to be productive and happy members of society. The mission of the organization matches that well.”

Larry followed in his dad’s footsteps professionally as well, farming for 27 years before moving to Pella prior to Troy’s high school career. Larry sold cars and insurance for many years before transitioning to part-time employment at Precision Pulley & Idler.

In addition to serving on COC’s Board, Larry also served on the COC Golf Classic Committee for 13 years and the COC Foundation Board for six years, soliciting for the organization’s annual fundraiser. And 13 years resulted in many stories.

“One year, I was challenged by some friends to wear my bib overalls and my green John Deere shoes to church on Sunday morning,” said Larry. “And my wife had to be with me. If I did, they would donate $500 to COC. In the end, I wore it proudly and they collected $700.

“And every year, I took my green John Deere tool box and my red Farmall tool box to the In’t Veld’s coffee timers and Happy Joe’s coffee timers to raise funds for COC. We ended up with as much as $2,350 in a single year; they are very generous groups.”

As a local business owner, Troy sees COC’s impact on the community. The CEO, CFO, Partner, and Physical Therapist at Kinetic Edge Physical Therapy learned about disabilities growing up and the experience stuck with him.

“I had a friend with intellectual disabilities in school,” Troy said. “As a physical therapist, I work with many people with disabilities. I see how a person can flourish if given the opportunity.

“I feel strongly about supporting local organizations. COC is a great representative of the town of Pella, where I call home and where my business calls home.”

Board meetings rotate between COC’s office locations and incorporate continuing education and awareness into the agenda.

“When we gather, we get the chance to see one of the homes or the factories,” said Troy. “We get to visit with people supported and employees. We get to see the community. Any individual that has the opportunity to see it and experience it will have a heart for it.

“There’s no more fulfilling work than the work being done at COC.”

“It’s great that we have people that enjoy working with the people supported,” said Larry. “It’s such a rewarding job.”

And Troy and Larry recommend getting involved at COC and making a difference in the lives of people with disabilities. But it’s a mutually beneficial relationship.

“COC is a great organization and you get more blessings out of it yourself than you give to others,” Larry said. “It was an incredible opportunity; it’s a great thing to be a part of.”

“My experience has been really positive,” said Troy. “It’s not a sacrifice for me to do it. COC is an organization that I greatly respect and having that first-hand knowledge of how it operates only strengthens what I felt before I joined.

“I just want to thank everyone who has committed their lives to fulfilling COC’s mission. It’s truly a blessing.”