In Her Words: Sharon Rook-Wisse reflects on 30 years at COC 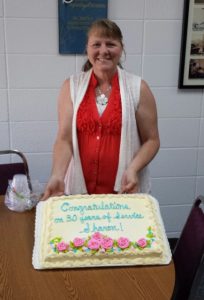 Christian Opportunity Center payroll administrator Sharon Rook-Wisse reflected on her 30 years with the organization…in her own words.

When I was hired at COC, the Executive Director did the job interviews. I was working in the nursing home wing of the Pella Community Hospital and told a co-worker that I wanted to do something different. She suggested I apply at COC. I went to COC after one of my shifts (still in my nursing uniform) and spoke to Office Coordinator Doris Nibbelink and asked if I could fill out an application. After I filled it out, I gave it back to Doris and she asked if I had a minute; she wanted to show someone my application. A couple of minutes later, I was greeted by Executive Director Art Ruiter and he interviewed me on the spot (the hiring process has changed a lot since then). My starting wage in 1985 was $4.00 an hour. In the 80’s, we called the homes “cottages” and people supported were called “clients.” To this day, there are still people in Pella that refer to the people supported as clients.

I started at COC on July 30th, 1985, in what was called the RCF/MR (Residential Care Facility for people with Mentally Retardation) as a med-aide supervisor. It is now the North Broadway ICF/ID houses and administrative offices.

During the spring of 1986, I started working in what is now Department 1 (back then it was called Work Activity Center-1) as an instructional assistant. Staff members in that department are now called work skills supervisors. One of my duties was taking care of two guinea pigs named George and Sidney in the Green Room. We also had two outdoor cats named CoCo and Patches. One of my favorite memories was watching a pretend game show on film from Heartland AEA with the people supported called “The Good Life” and another film series called “Circles” (to this day, if someone is standing too close to me, I tell them: “You are in my purple private circle.”).  I worked in Department 1 until August of 1999, most of that time I worked in a room called the “Blue Room,” which is now Executive Director Rod Braun and Associate Director John Eilers’ offices. My happiest memories are of the people supported that I worked with in the Blue Room.

During that time, I also worked early morning shifts at the Broadway ICF. I also subbed in what was called the B-CSLA Apartments (15 people living in one- and two-bedroom apartments with shared kitchens), which is now East and West Broadway HCBS. I also worked one summer in a two-bed HCBS apartment that COC had on Main St.

In August of 1999, I transferred to the front office as an office assistant and later as an office coordinator. My duties consisted of setting up job interviews, updating the vehicle schedule, processing people supported payrolls, setting up/taking down items for “Rustic Amenities” with people supported, providing tours with potential applicants for services, admission coordinator duties, and many other duties as assigned tasks.

In August of 2006, I transferred to the finance department which is where I have been for almost nine years. I process staff and people supported payrolls.

One of the main reasons that I have enjoyed being at COC for 30 years is working in a Christ-centered environment and being able to share my faith with others.

When I transferred to the finance department, a dear friend and former co-worker gave me a plaque which still hangs on the wall in my office today…

She believed
she could
so she did.

That has been my motto over the years, believing in myself and not being afraid to try something new. I have worn many “hats” at COC and have enjoyed serving others. I can’t imagine working anywhere else.