Since 1969, the Christian Opportunity Center (COC) has been proving what’s possible for individuals with disabilities in Central Iowa.  In celebration of COC’s 50th Anniversary this year, COC is pleased to announce the inaugural year of a new scholarship opportunity for local high school seniors.  The new award will be named the Sarah M. Braun “Proving What’s Possible” Memorial Scholarship.   For the past 12 years, COC has offered the Sarah M. Braun Memorial Scholarship which is awarded to high school seniors who are planning on a career in human services or special education, this scholarship will continue to be offered in the COC service area.

The new Sarah M. Braun “Proving What’s Possible” Memorial scholarship will also go to a local high school senior; however, this scholarship will focus on a senior who has a learning disability (LD) or an intellectual disability (ID).  Many colleges and universities are offering specialized programs for individuals with LD and ID to have a successful postsecondary education and more students with disabilities are choosing to continue their education.

Amy Zuck, the Public Information Director for COC, said, “I have learned from working at COC to never underestimate what an individual with a disability can do.  If we put low expectations on individuals with disabilities, it only hinders the talents and gifts that they can offer to our communities.”

A qualified applicant will be a local graduating senior who lives in Marion, Warren, or Mahaska Counties.  The applicant must be a graduating high school senior who will be attending a two-year community college, a vocational/technical training program, or a specialized program in the fall, and must have an Individualized Education Plan (IEP).

Sarah Maria Braun was the first-born child born to former COC Executive Director Rod and current COC employee Robin Braun.  Sarah lived in Pella for the majority of her life and graduated from Pella High School in 1999.  While attending college at Wartburg Sarah worked part-time at COC.  Sarah later attended UNI to finish out her degree in social work.  Sarah passed away suddenly in 2002 at the age of 21.

For more information on these scholarships and the eligibility requirements or to receive an application, please contact Amy Zuck, Public Information Director, at (641) 628-8087 Ext. 1105 or azuck@christianopportunity.org.

Providing 50 years of services, COC provides residential and vocational support and services to nearly 260 people with disabilities in Mahaska, Marion, Polk, Warren, and Keokuk counties. For more information visit https://christianopportunity.org/ or connect with the Christian Opportunity Center on Facebook and IowaCOC on Twitter. 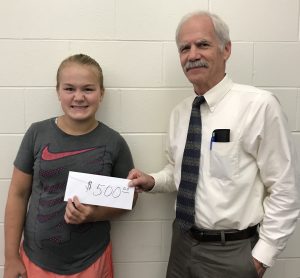 Two things that say summer in Iowa, is sweet corn and the Iowa State Fair.  So, when Look, Cook, and Eat (LCE), a digital cooking magazine, announced their Super Special Sweet Corn Creations contest, there were over 18 participants who jumped on the opportunity to enter.  Look, Cook, and Eat, isn’t just any digital cooking magazine, it has a specific goal.  Their goal is to help individuals with disabilities lead a more independent lifestyle, by teaching cooking and kitchen skills.

The competition, held during the Iowa State Fair, brought many different corn creations to the inaugural year of the Super Special Sweet Corn Creation Contest.  The recipes ranged from corn appetizers, corn salads, and the 2nd place winner was sweet corn and chicken eggrolls with a creamy cilantro sauce.  But, the recipe that took home the 1st place prize was Sweet Corn Chocolate Chip Cookies!

The winner of the contest was April Olson, who is a senior in high school.  She decided to enter the contest after her special education teacher at Knoxville High School informed her class about the competition.  As part of Aprils winnings, she received $500 cash and had the opportunity to donate $500 to an organization of her choice, which serves people with disabilities.  April chose Christian Opportunity Center (COC) as the recipient of the $500 donation.  April was introduced to COC by April’s older sister, a college student who worked part-time at COC this summer.

COC provides residential and vocational services to over 260 individuals with disabilities in Central Iowa.  John Eilers, COC Executive Director, “On behalf of the Christian Opportunity Center, we want to congratulate April on winning the State Fair cooking contest and thank her for her generosity in choosing COC for the $500 donation.  April exhibited a great deal of creativity in developing her award-winning cookies!  Thanks to Look, Cook, and Eat for their sponsorship of this event as well.”

Founded in 1969, COC has proudly been serving Individuals with disabilities in Marion, Mahaska, Warren, and Polk counties for nearly 50 years.  For more information visit https://christianopportunity.org/ or connect with Christian Opportunity Center on Facebook and IowaCOC on Twitter. 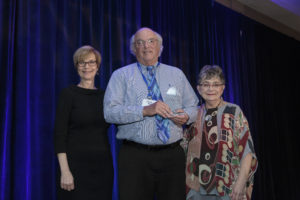 The American Network of Community Options and Resources (ANCOR) is a national association representing more than 1,400 private community providers of services to people with disabilities.  Each year ANCOR recognizes the most influential members to receive the Legacy Leadership Award. Since 2010, eighty-three members have received this award.  This year seven members were inducted into ANCOR’s Legacy Leadership circle, including COC Executive Director Rod Braun.

In a ceremony held in New Orleans in April, Braun was recognized for his long time, contributions to ANCOR.  Braun served as the Chair for the Grassroots Task Force for ANCOR’s National Advocacy Campaign from 2000-2003.  Braun led several key initiatives, including a fundraising event hosted by Christian Opportunity Center that raised $7,000 for the Campaign. Through the Iowa Association of Providers (IACP), Rod worked to recruit new members to ANCOR and mentored a range of ANCOR’s Iowa members. And, as a member of the ANCOR’s Board Development Committee from 2004-2014, Rod worked to develop an assessment tool for effective governance.

“My employment began in 1976 when I took a position working with people with severe disabilities.  It really was taken as just a job, but soon became much more and an inspiration for a job change from geology to disability services,” Rod Braun.   After 31 years of service to COC, Braun plans to retire in June.  COC is very proud of all the contributions that Rod has made to the disability services field locally and nationwide.

At COC we are in the process of switching over to an encrypted email system. This has been something that has been in the works for quite some time. As an organization we are often sending and/or receiving confidential, HIPAA-protected information. Without an encryption system in place, we are liable for any data breach or information loss that results through organizational email, as encrypted email is an industry best practice that will likely become a required standard in the future. While this additional step may be an inconvenience, please have confidence that COC is always working to protect the confidential information entrusted to it. To help everyone through their first experience, I am including a set of instructions for you.
Please note that the passcode may be sent to your junk or spam folder. Thank you so very much for your patience as we roll out our new system!

You will see an email like this from COC:
You’ve received an encrypted message from __________@christianopportunity.org
To view your message
Save and open the attachment (message.html), and follow the instructions.
Sign in using the following email address: your.email@domain.___
Follow the instructions to save and open the “message.html” file. When you do so, you should see a web page like this:
If you select “Use a one-time passcode” you will be sent an email with the passcode, similar to this:
Enter the passcode in the appropriate box and the original email will open.