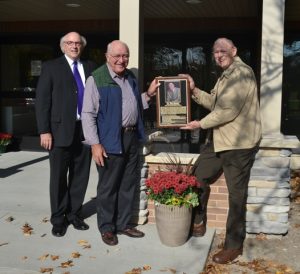 Christian Opportunity Center (COC) dedicated its new entrance in honor of its first Executive Director Harold Eiten with a brief ceremony and time of fellowship on Thursday.

COC Executive Director Rod Braun opened the ceremony with an introduction, presentation of plaque, and prayer. Harold shared his memories of COC and expressed his gratitude for the honor. Former Executive Director Bruce Nikkel closed the ceremony by quoting Harvey De Jager, former CEO of Hope Haven of Rock Valley. Harvey dedicated COC’s first building by saying: “The future of COC is as bright as the promises of God.”

In January of 1969, Harold visited Pella to meet with community leaders and parents about a job directing a special education program. Because the federal government had not yet mandated special education services in public schools, the program was to be fully funded by donations.

Six months later, Harold, his wife and six children journeyed from Michigan to Iowa on faith in a vision cast by local leaders and with no guarantee that the dream would become a reality. But by late summer, the program was up and running.

Harold served as Executive Director until 1973.

Some of Harold’s favorite memories include: COC Volunteer Corps who gathered 2,048 S&H Green Stamp books to purchase COC’s first van for transporting students; local families who served as Family Life Homes for students; and generous support from the local community that led to continued support of the mission of COC.

Harold’s passion and vision for COC set the stage for decades of successful supports and services for people with disabilities.