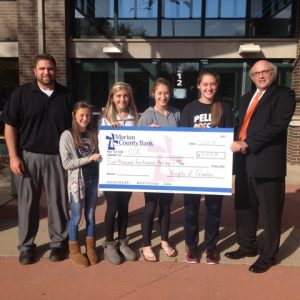 The Pella Knights of Columbus took a unique approach to this year’s campaign for persons with intellectual disabilities, creating a fundraising competition between local Pella students’ teams and groups, resulting in the group’s largest donation ever to Christian Opportunity Center.

Joe Lickteig’s two daughters play soccer and decided to enlist the help of their teammates to raise funds for this year’s campaign. But the girls’ soccer team took it one step further, making a friendly wager with the football team.

Word of the competition spread through the school, resulting in seven teams and clubs volunteering to help with the campaign.

Thanks to an annual trophy and added interest from teams and groups, excitement is already building for next year’s campaign.