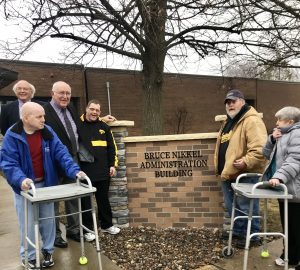 Christian Opportunity Center (COC) dedicated the Pella Administration Building in honor of its former Executive Director Bruce Nikkel with a brief ceremony and reception on Wednesday.

Individuals, with whom COC has supported for 35 years or longer, unveiled the new signage of the Bruce Nikkel Administration Building.  Due to inclement weather, the ceremony continued indoors.  COC Executive Director Rod Braun opened the ceremony with an introduction, presentation of the plaque, and prayer. Bruce shared his memories of COC and expressed his gratitude for the honor.

Bruce began his tenure in 1973 as COC director, at this time there were only three classrooms with 20 students with disabilities.  A year later plans were in the works to construct a 5-classroom building with a small gym, workshop, a life skills training center, kitchen and office space.   At the same time, Bruce began planning for adult vocational services in Marion County.

“This building when it was built, represented an end of an era and the beginning of new efforts for helping people with special needs and disabilities,” Bruce stated.  “I remember as a boy, the state was building institutions…that is where people [with disabilities] stayed.” He continued, “many of the early people we enrolled, some in this room today, came to us from state institutions. This building represents a change in culture and society and how they work with disabled people”.

Bruce continued to talk about the efforts of the community in raising funds for this building.  “Now, it [the COC building] also represents an extreme effort by the community.  It is incredible that the people from this community and the area really responded.”  Nikkel was successful in gaining community support and raised over $500,000 in pledges for the new building.  “So, is Jesus at work in Pella?  Go to 1553 Broadway and check it out.”

Bruce served as Executive Director until 1976, when he accepted a position at Elim Christian School in Palos Heights, IL.

Bruce’s dedication to COC continued to this day as he is very active in many COC efforts today.  After retiring and moving back to Pella, Bruce served two three-year terms on the COC Board of Directors.  Bruce continues to serve as a volunteer and is very involved in maintaining and updating the COC Tulip Time Float.